Last month I made some early tests with stereo vision and Geduino. I started connecting 1.0 MegaPixel Dual Lens camera to UDOO Quad and capturing the two images provided by the camera. 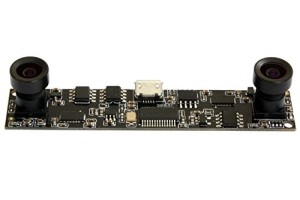 Stereo vision is the mechanism used by humans to perceive image depth and objects distance. The same mechanism (to be honest very simplified!) can be used on computer vision to get three dimensional perception of the space around. Stereo vision get third dimension comparing differences in perspective between two images taken at same time from two different point of view. The disparity map can show those differences in 2D image using colors.

Based on disparity map image depth can be calculated and it is possible to build a 3D model of world around.